Kel and his twin sister Isabel have traded places before—to escape lessons, to prank their royal cousins, and for Kel to flirt with handsome men at royal balls. But when Isabel runs away in tears shortly before her proxy wedding to Prince Darin of Pervayne, Kel takes her place, knowing he could cause serious problems between Pervayne and their home kingdom of Karleed if discovered.

Isabel will show up—eventually—and take her rightful place and no one will ever know. The question is, will Isabel arrive before Kel falls hopelessly in love with the servant his sister’s husband has sent along? What if Kel isn’t the only one pretending to be someone else?

Chapter One
Kel was as nervous as any bride as he prepared to take his sister’s wedding vows to Prince Darin of Pervayne. More specifically, the prince’s proxy, a duke to whom Kel had never been introduced.

It wasn’t the first time he’d dressed as his twin, but never for occasions of state—her wedding, of all things!—and never before had the consequences of discovery been so great.

Twins were considered an ill omen in the kingdom of Pervayne, so Kel had been sequestered upon the arrival of the foreigners in a tower that had fallen into disuse. Isabel, who had always known that, as the king’s niece, her marriage would be arranged, had seemed resigned to her fate right until a few hours ago. She’d stormed into Kel’s draughty chamber in tears and swore she would only marry for love.

Kel had tried to reason with her, but that had resulted only in Isabel accusing him of betraying her before she left in as much of a flurry of silks as she’d arrived.

When her maid, Molly, was unable to locate her mistress in order to dress her for her wedding, she’d sought out Kel. He and Isabel spent a great deal of time together, under normal circumstances, and it was reasonable to assume that, even if they weren’t in company, Kel would know where she was. But he hadn’t.

He had donned a hooded capelet to search out Isabel’s usual haunts, without giving away his close relation to her, while Molly waited nervously in Isabel’s chambers.

Unable to find Isabel anywhere, he’d returned to her chamber, certain she must be there, letting Molly array her for the ceremony.

By that point, finding someone in the family—his cousin, the crown prince, for example—would delay the proxy wedding.

Kel and Isabel had been raised in the royal palace after being orphaned at the tender age of three. They knew almost as much about the king’s policies as his own children, their cousins. Kel understood this ceremony, proxy though it might be, was an important aspect of the treaty King Maurice of Karleed had negotiated with King William of Pervayne.

Now Isabel was gone, the proxy wedding only an hour away, and Kel was in his sister’s undergarments with his sister’s lady’s maid. “You could simply tell the king your sister’s run off,” the maid, Molly, suggested as she combed out Kel’s hair.

“I wish it was that simple. But it’s still a much-needed political alliance and informing the prince’s envoy that ‘oops, we’ve misplaced the bride’ may be taken poorly.”

“She is twenty,” Molly said with the kind of reproof only many years of personal service could get away with. “Time she wed and got over her foolish—”

Kel nodded in the mirror, jerking the brush stroke somewhat painfully. Already his hair, normally worn in a single plait down his back, hung in loose dark waves over his shoulders. It softened the planes of his freshly-shaven jaw and angular cheekbones. “I know of her lovesickness for the gardener’s first apprentice.”

Molly tutted. “If the world did not hold a woman’s virtue higher than a man’s, she’d have got him out of her system by now.”

Kel coughed out a surprised laugh at the lady’s frankness. “You think it’s merely a passion of the flesh?”

“I’m a woman myself,” she remarked. “I know of these feelings. Many a young woman in the palace feels the same for you, I’ve no doubt.”

“Pardon my frankness, my lord, but while it is fairly common knowledge among the staff at Castlemere that your eye never falls on the fair sex, many a maid desires to be the one to ‘fix’ you. Granted, many others are relieved to know there’s a man of rank in the palace who’s safe to encounter in a dark stairwell.”

“I hadn’t realized I was so transparent,” Kel said cautiously.

“Oh it’s none of ours what the above stairs get up to,” Molly said cheerfully, adopting a broad, country accent.

“I can see her fascination with the gardener’s first apprentice, though,” he said in a thoughtful, if hesitant tone, still studying his reflection. The chemise he wore had a scooped neckline and only the thinnest of straps to hold it up. The delicacy of the fabric served to emphasize the most unladylike shape of Kel’s arms and shoulders. Because his sister dodged needlework to join him in the yard learning swordplay, her arms were almost as muscled as his—the sleeves of her gown wouldn’t strain if they were of a close-fitting style.

Molly chuckled. “Simply to look at, he’s a fine specimen, especially when he strips down in the heat, but my mistress believes she’s in love with him.”

“Could she be? I’ve heard love is a fickle thing.”

“It is. But for people like you and the mistress, love and marriage are completely different things, my lord. Marriage is—”

“An alliance, a joining of houses,” Kel finished with her.

“You really should not be taking her place.” She lifted the frothy concoction Isabel was to take her vows in. “Come stand up and let me help you into this. Then we’ll see where we need to accentuate with some well-placed padding.”

“It’s a proxy wedding. If the groom needn’t be here, neither does Isabel,” he said, trying to hide his uncertainty of the truth of his words. “What do you know of padding? Do you dress other men in women’s clothing?”

“Naive child,” she mock scolded, dropping the heavy skirt over his head and tugging it into place around his waist. She quickly tightened the skirt strings. “You think every woman is naturally endowed with breasts ample enough, hips broad enough to suit herself?”

“I hadn’t ever thought about it, finding neither ample breasts nor broad hips desirable,” he said. His previous adventures in Isabel’s clothing had been wrought in secret, Isabel powdering his complexion paler and lacing him into one of her awkward bodices.

The ivory skirt was full and of a rather stiff fabric that someone had spent a great deal of time sewing pale pink, ivory, and white fabric flowers to, making it seem almost fluffy. “I think you can do without hip padding,” Molly said, giving him a critical look.

She helped him pull the bodice over his head, being careful of the hair she just dressed. She tugged the lacing at the back and then moved to the wardrobe to fetch two small bags. She handed them to him. “Put these in your bodice. It’s millet, which gives a natural enough shape, but it won’t pass a squeeze test. Not that anyone should be grabbing at your chest, anyway.”

Kel didn’t admit he was familiar with them. Nor did he ask how it was Molly knew of them. He simply did as she instructed. Today would be the first time he’d have to fool people in broad daylight. Including his own relatives.

Molly laced him up tight and fixed his hair before standing back to study him critically. 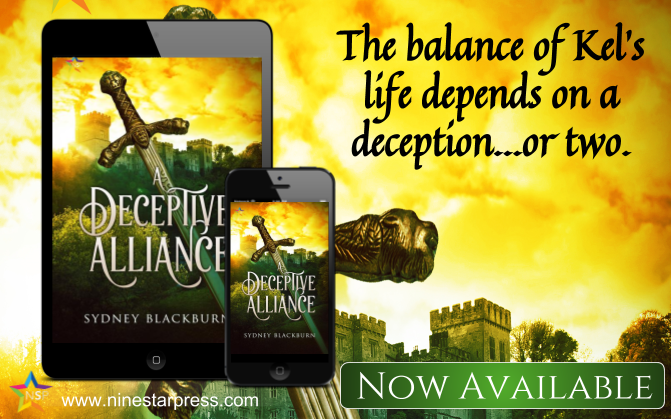 Sydney Blackburn is a binary star system. Always a voracious reader, she began to write when she couldn’t find the stories she wanted to read. She likes candlelit dinners and long walks on the beach… Oh wait, wrong profile. She’s a snarky introvert and admits to having a past full of casual sex and dubious hookups, which she uses for her stories.

She likes word play and puns and science-y things. And green curry.

Her dislikes include talking on the phone, people trying to talk to her before she’s had coffee, and filling out the “about me” fields in social media.

Besides writing, she also designs book covers for poor people.

1 thought on “Book Blitz and Giveaway! – A Deceptive Alliance by Sydney Blackburn”