Once people die, they’re not meant to wake up.

For college student Beck Murray, this doesn’t quite sink in until he’s sitting in a stranger’s apartment, reading his own obituary. He has no memory of how he died or how he happened to wake up—all Beck knows is that he’s been dead for six months, and now, incredibly, is not.

He assumes his biggest challenge will be explaining himself to his family and friends. This proves not to be the case as, one by one, Beck and his friends become the target of something evil. A darkness hangs over Beck, following every footstep he takes in his new life. He cannot fight it because he does not understand it. Soon, it becomes clear that Beck isn’t the only person who’s returned to life, and far from the only person in danger.

With the help of a young witch and a mysterious bookshop owner, Beck must learn to overcome the evil plaguing him before it drags him back down to the grave… and takes everyone he cares about with him.

The Cost of Living
Emilie Lucadamo © 2019
All Rights Reserved

After his fourth failed attempt to pull himself to his feet, Beck gives up and collapses against the pavement once more.

It’s no use. He could have the willpower of Hercules, yet he wouldn’t be able to haul himself off of the ground. His body is too strung out; his limbs are exhausted. He feels drained from head to toe. Whatever happened to lead him here, it sure did a number on him.

Here—where is here? Beck has no clue. Naked, in the middle of an unfamiliar street, with a dizzying headache and no memory of where he is or how he came to be there. That’s where he is right now.

It’s far from the best situation to be in. Not to mention the fact that the world’s biggest storm cloud seems to be focusing all its wrath on him alone. Rain lashes his skin, chilling him, and the thunder booming overhead rattles in his bones. He tries to move once more, and a fiery pulse of pain shoots through his entire body.

Beck has had better nights.

He’s wound up in some pretty undignified places over years spent growing up with his best friends, but this has to take the cake. This is a lot worse than the time his best friend James dared him to sleep on the roof in his underwear. This is even worse than the time he and his brother, Dylan got locked out of the house during a snowstorm and had to spend the night huddling for warmth on the porch. At least in those situations, he knew where he was. He had some choice in the matter, (even if it was between Dylan’s bony elbow in his side or freezing to death). This—this is a whole new level of weird.

He tries to lift his head, and a pulse of pain sends it right back down again. Thunder crashes overhead, followed by a flash of lightning. Beck swallows past his parched throat, realizing for the first time what a dangerous situation he could be in.

“Oh man,” he rasps, realizing too late that these are the first words he’s said since waking up. This absurdity is not helped by the fact that he’s scrambling around on his back like a lethargic bug. It seems like a miracle he’s able to speak at all. “Mmm…c’mon, c’mon…”

It’s no use. He can’t pull himself to his feet. Defeated, Beck collapses back onto the pavement again and closes his eyes. He’s so tired… Maybe a few moments’ sleep will give him the energy he needs.

He’s just about to drift away, when a sudden interruption startles him from his haze.

The voice is deep, clear as a bell over the roaring storm around them. Beck jumps, eyes springing open. It would take more self-control than he possesses not to gape up at the shadowy figure towering above him, silhouetted against the distant glow of a streetlight.

He blinks up at the stranger in a daze, trying to make out any features past the rain and his blurry vision. The man looming above him is slender, not too tall and not too muscular. The fact that he seems unfazed at finding a naked guy in the middle of the street probably says the most about him. Being the naked guy in question, Beck’s not about to judge.

He isn’t about to get up without assistance, anyway, so yeah, he probably could use some help. “Wow, you figured that out?” he croaks, and tries for a laugh. It comes out as a wheeze. Beck is left choking when he attempts to take in a breath. He collapses again onto the street, landing hard on his side. His chest convulses with each ragged cough. By the time he is able to breathe again, he’s quaking like a leaf in a thunderstorm. Hell, that’s just about what he is.

“Easy…” The figure is kneeling by his side now and has a hand on his back. He’s warm; subconsciously, Beck leans into the touch. The smooth hand runs along the curve of his spine, leaving a trail of tingling heat in its wake. The pressure in Beck’s lungs slowly ebbs away, like water receding after high tide.

“Feels like you’ve got a pretty bad fever,” the man says, his strange, precise accent twisting the words until they sound more like a melody. “This rain can’t be helping. Wanna get out of it?”

Hands grip his biceps, helping him to his feet. Beck’s legs feel like noodles. He stands up, wavers, and would have fallen back down were it not for the grounding presence keeping him upright. He tries to straighten up, and his stomach does a perilous somersault. Hot bile rushes up his throat, and he only has time to double to the side before he’s heaving up acid.

By the time he straightens up again, he’s trembling from the exertion. He feels dizzy enough that he’s afraid to close his eyes, doubting his capability to open them again. When he tries to turn to his good Samaritan, he finds himself confronted with a sharp-featured face, dark eyes studying him and brows creased in concern.

“Sorry,” Beck tries to say. It comes out garbled. Fortunately, the guy doesn’t seem to care.

“Come on,” he urges, hooking an arm around Beck’s waist. “Let’s get you someplace warm and dry.”

Needless to say, Beck’s in no state to argue. Besides, he isn’t sure he wants to. The guy’s being nicer than he has any obligation to be, and it’s probably the fever talking, but his touch is the most soothing thing Beck can remember in a long time.

They don’t walk far. The stranger leads a stumbling Beck down the street, and they pass only a few shops before coming upon one with its windows piled high with books. A sign above the door reads Lehexe’s Books in spindly hand-painted lettering. The shop is dark enough that Beck can’t make out much through the window, but Beck’s new friend—Lehexe, presumably—doesn’t hesitate to open the door. He hustles them both inside and shuts out the storm behind them. No sooner are they standing in the middle of the shop floor than Beck finds rain pooling at his feet, soaking into the wooden floor. He sways in an effort to keep from dripping, and nearly overbalances again.

Lehexe—busy fumbling with a set of keys near a door behind the counter—casts a look over his shoulder and huffs. “Try to keep upright for two seconds. You can do that.”

Beck definitely can. He’s not an infant. (If he maybe has to grab hold of the counter to keep his balance, well, he thinks the other man is too preoccupied to notice.)

The right key finally slips into the lock, and Lehexe opens a door to a darkened hallway. He turns to look at Beck, raising an eyebrow as he gestures to him. Beck lets go of the counter, takes a step forward, and gets blindsided by a head rush that sends him falling on his face.

Being naked on the floor of some poor guy’s very nice bookshop is better than being naked on pavement in the middle of a storm…but only just. There’s a lot more indignity to his situation now that Beck is actually trying to keep himself upright. He can’t. It’s not just his legs refusing to cooperate with him. His entire body feels sluggish, achy and weighed down. His veins feel like they’ve been pumped full of lead. His skull is throbbing, stuffed with cotton and running with all the efficiency of a dying engine.

“I’m really sorry about this,” he manages to slur into the nice stranger’s woodwork. “’S not my day.”

“I figured,” Lehexe says as he helps peel Beck off the ground—and he is really being much nicer than Beck deserves. “I hope stuff like this don’t happen to you often.”

“It really doesn’t.” This is the weirdest thing Beck can remember happening to him in, well, ever. He’s not handling it well.

By some miracle, Lehexe manages to get him back on his feet again and leads him out of the shop. The hallway behind the door is small, narrow, with several doors lining the walls. One clearly reads Bathroom; the other, Beck suspects is a closet; as for the third, he doesn’t have a clue what could be behind it. (His half-delirious mind flashes back to the vintage game shows his grandma used to love, where shoulder-pad-flaunting contestants chose between Door One, Door Two, and Door Three for the chance to win “the prize of a lifetime!” Lehexe doesn’t make a good game show host, and Beck’s hairstyle isn’t nearly exciting enough for 80s television.)

There’s a final door at the end of the hallway, styled differently from the others. This one is great mahogany, with a firm frame, and another lock just beneath the knob. Lehexe turns to his set of keys yet again, and in seconds he has the door open to a set of stairs that tower over Beck’s head, making him feel dizzy.

His heart sinks. His stomach drops. He feels himself slump further to the floor, until Lehexe stubbornly hoists him back up again. Just looking up there makes his head spin, and the notion of dragging his noncooperative body up the stairs is nothing short of a pipe dream. There’s no way he can do it—just no chance.

Beck considers this. “If I pass out, will you catch me?”

Well, that’s good enough for him. 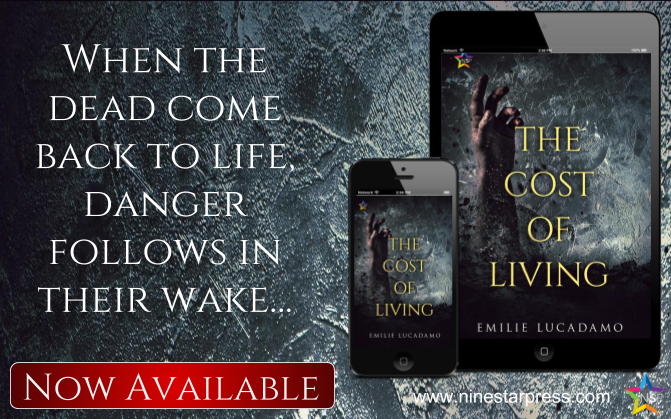 Emilie Lucadamo has too many stories, and not enough words to tell them. At eighteen years old, she has been writing for most of her life, and telling stories even longer. Her dream is to one day become a critically acclaimed author. When not writing, she’s probably reading, or spending quality time with her dog.