After being orphaned and forced to work as a palace slave, fifteen-year-old Rasha decides to end her life, but when she plunges a knife into her chest, she doesn’t die. Instead, a strange, icy power possesses her. The last time it took over, someone got hurt, and Rasha can’t let that happen again.

But she’s got bigger problems. Her twin brother is alive, yet held captive by Solaris, a powerful sorcerer. When Rasha runs into Adriana, the selfish princess she once served, they discover Solaris is a common enemy since he destroyed the palace and kidnapped Adriana’s parents.

Together, Rasha and Adriana set out on a rescue mission. Personalities clash and tempers flare, but other feelings surface as well, feelings neither girl could have predicted.

And with the help of a ragtag group of companions, they might just be able to succeed on their quest…until an ancient evil emerges to wreak vengeance on their world.

The Sun and Moon Beneath the Stars
K. Parr © 2019
All Rights Reserved

Chapter One
Rasha’s knife glinted in the moonlight, sending a reflective beam skittering across the waves. The Sea of Mishal crashed to shore and tugged at her skirts while her feet remained buried in the silt. She didn’t register the cold of the water, nor the grittiness of the sand, and though her gaze was fixed on the horizon, her focus remained on the knife quivering in her grasp.

Eight years ago to the day, Rasha had washed ashore on this very beach and begun her new life as an orphan, an outsider.

And now was the perfect time to end it.

A salty breeze tossed black hair into her eyes, and she blinked away the stinging strands. Her cloak and dress flapped, heavier at the hems where water soaked through. She tightened her hold on the knife, though the calluses on her hands prevented her from feeling the smooth ivory or polished silver. She’d spent most of her life washing utensils for the royal family, and it’d been easy to smuggle this one into the pocket of her servant’s uniform.

In the distance, Rasha imagined the twinkling lights of her homeland, the island of Kcharma. Even though her people had cast her out, she refused to waste her last breath among those who reviled her simply for being Numenarkan. Eight years of punishment was enough. She’d served her penance and would join her family in the afterlife. She prayed whatever gods existed would allow her that much, at least.

Rasha tilted the knife so the tip pressed beneath her sternum, angled up toward her heart. She inhaled a shaky breath and drew back the weapon, visualizing the arc from air to flesh. She couldn’t miss.

She closed her eyes. The waves crashed.

She plunged the knife into her chest.

For an instant, blinding, searing pain screamed through every nerve in her body.

Rasha opened her eyes. The hilt of the knife protruded from her chest, but no blood pooled, as if she’d stabbed a doll, only she couldn’t breathe.

An icy sensation started in her toes, and the tingling numbness spread up through her calves, then her thighs. The cold froze her pelvis and stomach and locked her arms to her sides. She trembled and fought the feeling, envisioning warmth, but it was too late. The ice darkened her vision, and she remembered.

When the ice first claimed her long ago, she and her family were banished.

Now, right before the cold wormed its way into her mind, her last thought was fear over who she would hurt this time.

Princess Adriana ven Kerrick slept fitfully. She tossed and turned on silken sheets but couldn’t get comfortable. Her nightgown bunched beneath her, and she smoothed it with a quick tug.

Tomorrow she turned sixteen, and her father would officially name her heir apparent. All her training prepared her for this, but doubt still rankled, not at her own performance, but at her father’s approval. Over the years, he’d displayed obvious disappointment over the miscarriages of her siblings, yet spared little more than a nod to his only living child. Did he not want Adriana to succeed him?

Queen Estelle, who had only a few hours ago plaited Adriana’s long, white-blonde hair into a loose braid, assured Adriana her fears were unfounded. King Romulet loved his daughter and was proud of all she had accomplished in her studies. She would make an excellent ruler.

Adriana shifted onto her back and let out a frustrated sigh.

Strange thunder crashed, causing her whole bedframe to quiver. Adriana shot up, wide awake. The palace rumbled and shook on its foundation. The candles the servant lit before bed flickered eerily against the stone walls of her room. The glass windowpanes rattled in their frames.

She shivered in the abruptly still air. The commotion was probably an earthquake, or perhaps an accident in the kitchens. Unless…

Adriana threw off the sheets and pulled on slippers. Just as she stood, her bedroom door flew open. Queen Estelle marched into the room, breathing hard. Her own white-blonde hair flew about her face, and she wore a thin robe over her nightclothes.

“Adriana, come. We must hurry.” The queen grabbed Adriana’s hand and dragged her into the corridors. Servants scrambled around in confusion, their voices low.

“What’s going on?” Adriana demanded as they darted through the halls.

Adriana gasped. Distantly, people screamed, and metal clanged. Smoke billowed in the corridors and lodged in her throat. She coughed at the burning sensation.

Queen Estelle pushed through the throngs of people toward the western wing, where the guest suites were located. They were empty now, as they had always been. The smoke thickened around them, black and roiling.

“Head down,” the queen said.

They ducked beneath the smoke, their footsteps muffled on the carpeted floors. Scuffles broke out far behind them, back near Adriana’s room, and shouts echoed.

Adriana trembled. Her eyes stung with smoke. The torches were sporadically lit, many having burned to the last nub from neglect. In the darkness, the walls closed in on her, and her gaze jumped from shadow to shadow, wary of attackers.

At another concussive explosion, Adriana fell forward into her mother, who steadied them both against the wall beneath a dying torch.

Queen Estelle wound an arm around Adriana’s shoulders and squeezed. She spoke in a quiet yet firm voice. “Solaris is a mage.”

“But how? I thought the war eliminated them.”

The weak torchlight accentuated the hollows on the queen’s face. “Magic was lost, but not gone.”

“But Solaris—? The rumors are true?”

Was Solaris Numenarkan, then? No matter what Adriana’s people did, the Numenarkans would never lift their ancient grudge, and now they had a powerful mage on their side.

The queen shook her head. “We don’t know if he’s Numenarkan.”

“Then how do you know he’s the one attacking us?”

“Because he said he would.” Her jaw clenched. “Your father crumpled up the missive and threw it into the fire.”

“What does he want?”

Her mother’s eyes shone. She shook her head. “There’s something I should’ve told you a long time ago, but I was too afraid. And I wasn’t sure…” She inhaled a bracing breath. “It didn’t work on your siblings—they were born without life. I couldn’t give them what they’d never had.”

“What are you talking about?”

The queen gripped Adriana’s hands. “Magic runs in your veins, Adriana. Strong magic. But to use it, you will need to make a choice.” She paused. “And you’re not ready to do that yet.”

A shiver of fear lanced down Adriana’s back, even as confusion crowded her mind.

The queen said no more and turned on her heel. Adriana could do nothing but follow her down the dark, winding corridors. The booms increased until the whole palace quivered. The floor rolled like the ocean, and Adriana staggered on unsteady legs. At the far western corner, Queen Estelle pressed a tiny, diamond-shaped knob on the wall. A slab of stone shifted to reveal a secret staircase.

“You must go.” She pushed Adriana toward the opening. “The stairs will lead you to a tunnel you can take to Veltina Forest. When you get out, run.”

Adriana drew up short, feeling cold. “You’re not coming with me?”

“I need to protect your father. He doesn’t know about his gift, and Solaris will do anything to claim it.”

The queen smiled tightly and stroked Adriana’s face. “You come from strong bloodlines on both sides.” She leaned forward to press a kiss to Adriana’s forehead. “I need to know you’ll be safe.”

“No!” Adriana fisted her mother’s robe in her hands, but the queen pried her fingers loose.

“We will meet again. I promise.”

They both tensed at the nearby clatter of metal.

“I love you. Now go!” Queen Estelle shoved her, and Adriana fell backward into the opening. She yelled just as the slab pressed closed, sealing her in absolute darkness. 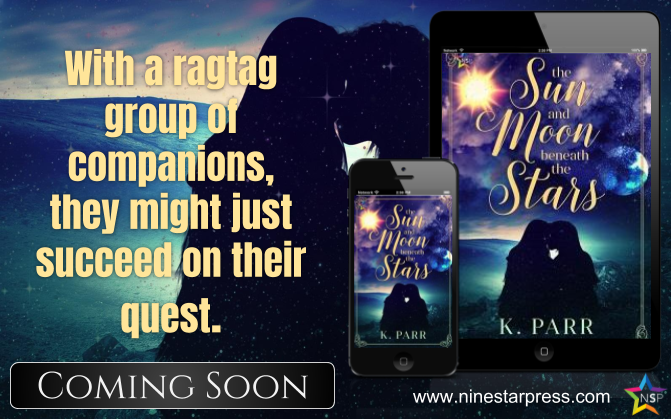 K. Parr earned her MFA in Writing Popular Fiction from Seton Hill University in 2017. She currently works as a youth services librarian in Rhode Island, where she writes romances celebrating love in all shapes and forms.