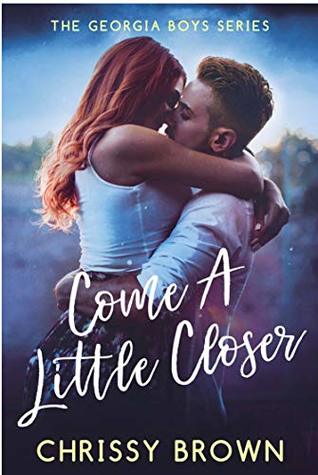 Sophie was the love of my life. Okay, we were twelve the last time I saw her but still. I’ve tried everything to move on—whiskey, women, weed. Nothing seemed to fill the void. Now, ten years later, she shows up out of the blue. The problem, I’m not the boy she used to know. I have a reputation that could ruin everything. Still, I have to try. Even if nothing happens between us, having Sophie in my life as a friend is better than not having her at all.Come A Little Closer is the second installment in the Georgia Boys Series. It can be read as a standalone novel.

END_OF_DOCUMENT_TOKEN_TO_BE_REPLACED

In 2012, one cycle of an ancient calendar system came to a close. Humanity predicted its downfall, but it wasn’t the end of their evolutionary climb. It was the beginning.

Willow Kent is discovering that life as a second-phase prodigy comes at a price. Trapped in the London Core, her choices are limited, made difficult by her forbidden romance with Reece and the presence of a new commanding officer who establishes harsh rules. With unpredictable skills and a growing distrust in her birth parents, she is struggling to play the Core’s game. But when opportunity arises in the form of a mysterious shapeshifter, Willow realizes there’s more to her own evolution than meets the eye. She soon learns that keeping secrets is a key move, and the more dangerous they are, the greater her need to evolve into the powerful prodigy nature intended her to become.

But those closest to her have their own secrets, and her status has made her an easy target for betrayal. Who will she turn to, when nothing is as it seems?

END_OF_DOCUMENT_TOKEN_TO_BE_REPLACED

Adaline Frost’s life officially sucks. Now that her BFF has found her true love, Addy is constantly stuck being the third wheel. On top of that, she hasn’t started her junior project yet, so her advisor pairs her up with what could only be described as the “Reject Breakfast Club.” Instead of the weirdo and the troublemaker, Addy is forced to work with two stoners, a popular girl, and her crush, Austin Reed, the jock who broke her heart.

Austin Reed is sick of being labeled “dumb jock.” If he doesn’t get an A on this project, he can kiss his future goodbye. Austin thought he’d gotten lucky being partners with the very nerdy Adaline Frost, but boy was he wrong. Addy jumps down his throat about his being late and calls him names like “manwhore” on the daily. She has no idea Austin works before and after school in order to help his mom with the bills. Yeah, he’s made mistakes and has had lots of girlfriends, but he doesn’t need Adaline Frost to remind him of it every time he sees her.

Can Austin and Addy ever be a thing?

Right Girl Wrong Timing is book 3 in the Offsides series by Natalie Decker.

END_OF_DOCUMENT_TOKEN_TO_BE_REPLACED

Title: Nick and June Were Here

Disclaimer: I received this arc in exchange for an honest review from the publisher.

END_OF_DOCUMENT_TOKEN_TO_BE_REPLACED

Ava has everything planned, as usual. Finish senior year at the top of her class, perform her best dance routine at the dance concert, and have the greatest prom ever. But her best friend, Cade, has other ideas. He convinces Ava to abandon her rigid schedule and enjoy her last year of high school. After letting her hair down for one amazing night and exchanging a steamy kiss with Cade, she’s ready to explore this carefree side of herself, until someone plays a cruel joke on her. Humiliated and hurt, Ava retreats into her carefully constructed box, hoping everything will go back to normal.

But it doesn’t. What she thought was a prank has turned out to be so much more, and she doesn’t even know the half of it. Determined to handle the situation herself, Ava hides her true feelings from her friends and her new love interest, but is quickly pushed past her breaking point. The survival of a sickening betrayal, a broken heart, and a perilous attack mean very little when lost in a game you don’t even know you’re playing.